St Silas Church in the West End of Glasgow has voted to discontinue its status as a licensed private chapel within the Scottish Episcopal Church. After a process of consultation and prayer, a members vote was held and an emphatic majority of 86% voted to leave.

St Silas describes itself as a growing, welcoming, diverse church family of many nationalities and all ages. The Rector, Martin Ayers, says, “We welcome anyone and everyone to spend time with us and discover how Jesus answers the big questions of life.” The church has a congregation of 225 on average each Sunday, making it one of the largest churches in the Diocese of Glasgow and Galloway.

The Church has made the following statement:

‘Recent decisions of the Scottish Episcopal Church have made clear to us that the denomination does not regard the Bible as the authoritative word of God. With deep sadness, we have therefore decided that for reasons of integrity we can no longer continue as part of the Scottish Episcopal Church. We want to leave with goodwill towards those with whom we are parting company, and sincerely pray for God’s blessing for the SEC in the future, and its renewal around God’s word.’

He added: “We have taken the decision to leave because of our commitment to Jesus Christ and his word. Above all, though, our vision remains unchanged. We are a community of ordinary people who believe in an extraordinary God, and we are seeking by our words and actions to make known in Glasgow the life-transforming news of His love, revealed in the life, death and resurrection of Jesus Christ.”

St Silas Church now says it will accept the offer of alternative oversight and fellowship from the Anglican Archbishops who lead the Global Anglican Future movement (Gafcon), which represents over 50 million of the 70 million Anglicans worldwide.

Mr Ayers said: “Our goal now is to be part of a network of faithful Anglican churches in Scotland, serving our communities, making Jesus known, and working in partnership with bible believing churches of any denomination. We welcome others to join us.” 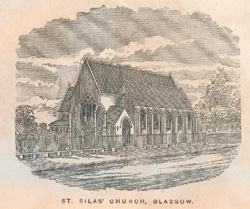 The congregation of St Silas was established in 1864 as an independent private chapel committed to the 1662 English Book of Common Prayer. For much of its history, it was under the oversight of Bishops from the Church of England, particularly the Bishop of Carlisle, but a few decades ago the congregation took the decision to join the Scottish Episcopal Church as a Private Chapel.

It is the fourth congregation to decide to leave the Scottish Episcopal Church since 2016. However, the Rector, Martin Ayers, identified the decision of the denomination in the 1980s to move away from the 39 Articles, the historic Anglican basis of faith which continues to be an essential part of the SEC’s sister denomination south of the border, the Church of England, as a key moment.